So here we are, on the fourth scenario. I finished this one a bit ago, and to be honest, by this point I was getting pretty tired of these games! Which is unfortunate, but each one just seemed to work out... not well! Each time the facet of the game the scenario was meant to be highlighting just wouldn't happen! and that carries on in this game, where the focus is meant to be on command abilities and spells. None of which had much effect on the game.
All of this is a way of saying that I'm just going to give a quick summary of the game with a couple of pictures, and then move on! 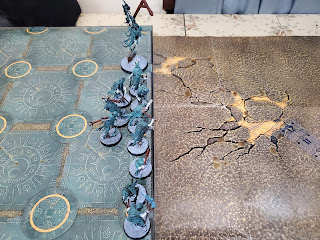 So this was a battle over a temple and or crypt once more, with the ghosts having a leader! They faced off against three stormcast wizardly types. 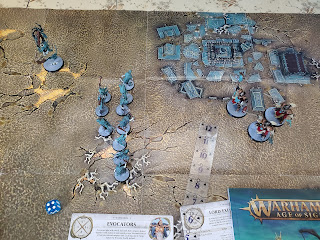 Everyone just kind of ran at each other, trying and failing to cast spells. 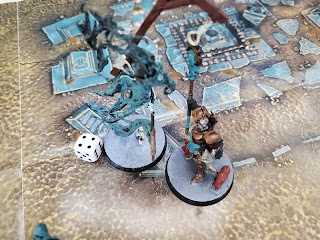 The lord executioner and the... stormcast main wizard (who i gave a pet pig) ended up dueling! And missing each other repeatedly. They were just... so terrible at everything. Including, once again, spells. 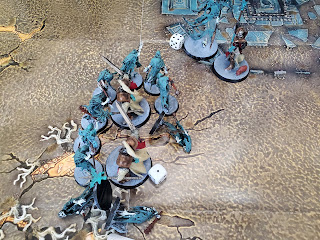 The evocators did their thing, and beat up some chain ghosts. 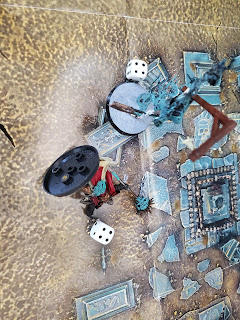 The executioner did his thing too, and finally triumphed against the villainous/heroic wizard! The pig escaped, of course. 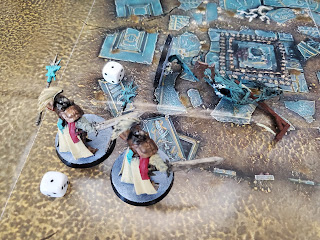 Meanwhile these guys beat up more ghosts, and actually cast a spell that beat up some more! And the rest ran, or floated off, freeing them to avenge themselves on the gallows ghost. A Win for the stormcast! 2-2 now.
And that was that. I'm taking a break from this, as it's probably clear from the tone of this post that I'm tired of these scenarios. But I will finish the last one, at some point.
Next? Things!
Posted by amazingturtles at 6:52 AM No comments:

Starter Sets And Such Part 3

Well, here it is then, another battle report from the starter set! There's not too much to say in introduction, so here we go!
This is the scenario that's meant to teach about battleshock (aka gw's way of handling morale) and you can bet that it... basically didn't come up during the whole fight.
The scenario begins with some storm guys on top of a box, waiting for the approach of chain ghosts! They approach the crypt and/or temple and the crossbow knights fire mightily! And miss every shot. Again. *sigh* 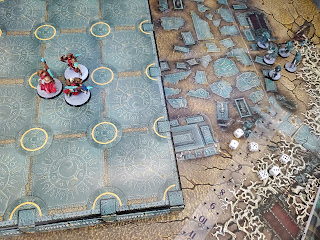 The chainghosts do their thing (float) and reach the top of the temple and/or crypt, but they cannot charge! The other group does manage to charge in, yelling, and they take down one of the storm fellows, losing one of their own in return. 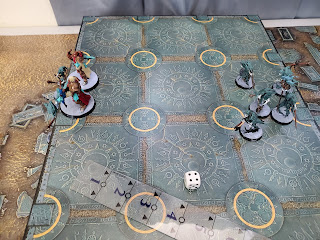 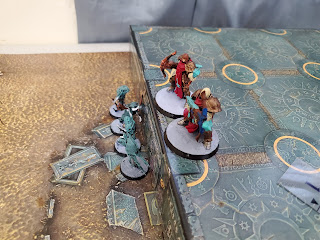 The fight grows fierce (as fights often do, and the other ghosts jump on into the fray. Meanwhile, another ghost is unghosted. 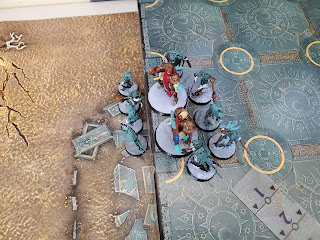 It's not enough though, and the ghosts keep on hitting with their hitting stick, taking down yet another of our heroes/villains (depending on your perspective) 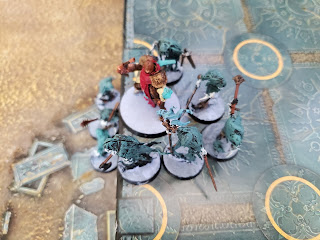 They can't hold out against the relentless onslaught of spirit fists, and they too... give up the ghost. 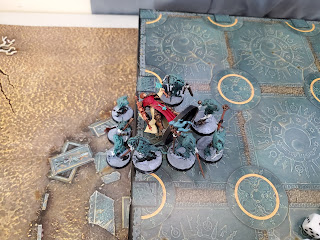 Another victory for the nighthaunt (not to be confused with nightstalkers) and another staggering defeat for the crossbows! They have missed every time in these scenarios, i think. That's fun.
Next: The next one in the book!
Posted by amazingturtles at 7:24 AM 2 comments:

Let's keep this going! On to scenario two of the Tempest of Souls starter set, one that is meant to teach how ranged combat works.

Time to see how I can mess that up.


Our scenario begins with one castigator (which is a silly name, so let's call her Hattie) facing off against four GRIMGHAST REAPERS (which is also a silly name, but they're ghosts and don't get names, I guess.) On the first turn they casually drift up towards Hattie, who fires a single shot and removes one ghost from the board! 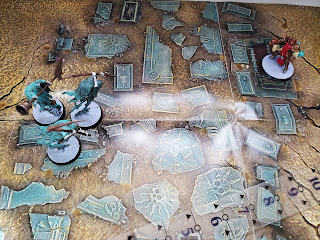 The ghosts are clearly perturbed by this, at least as perturbed as any ghost can be, and they show that by... failing to charge and just drifting around a bit more. This allows Hattie to triumphantly get off another shot that kills another ghost!

At this point I kind of got bored of all the aimless drifting and decided to have Hattie charge the ghosts, confident that her skills with a crossbow would see her through! 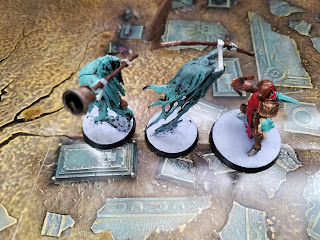 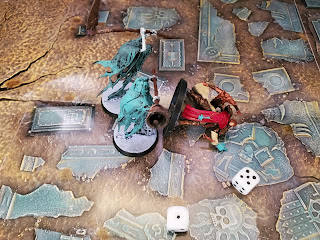 And so, alas, the mighty Hattie fell, though she may return some day. The ghosts returned to their unlives of wandering about the place. And the record stands at Stormcast 1, Nighthaunt 1.

Next: The Next Scenario, which may involve more than one person on the stormcast side!

Posted by amazingturtles at 6:30 AM No comments:

For Love of Starter Sets

So as you can probably guess from the title, I've always been really fond of starter sets in miniature games. They're just... exciting, you know? Especially the ones that actually come with full rule books. That's another i'm fond of collecting, to be honest. Rule books of all kinds.

With the pandemic and everything (what a phrase that is!) i'm quite obviously not doing any shopping, and that's not much of a much in the situation. But I have had a starter set sitting around that i wanted to get started on, and now i have! It's the Tempest of Souls set from age of sigmar, ghostly fellows vs wizardly knights, and it comes with an... ok rule book. It's gw so it's far more concerned with selling you things, but it does have one of my favorite other things: a set of intro games to play.

So that's what my next few posts will be. I'm going to play through this... not too complex intro games and paint and just have fun with them. I actually already started a bit ago, so without further ado, here we go! 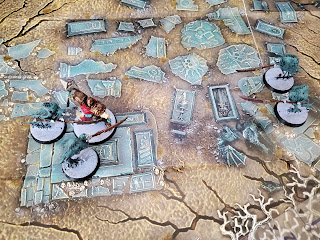 The battle begins as our hero (or villain, depending on which side you're one) is charged by some ghostly horse fellows. Using their stabbing sticks, they stab him up good, dealing out a whole 1 wound! Our hero (his name is... Wilberforce. It's Wilberforce now) is in a spot of trouble. 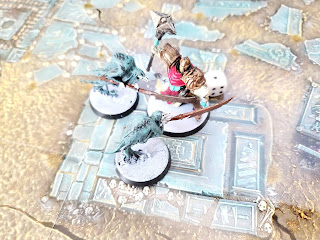 But Wilberforce isn't about to give up, that's not the Wilberforce way! And with a mighty swing or two, he lays the ghost horsemen low. 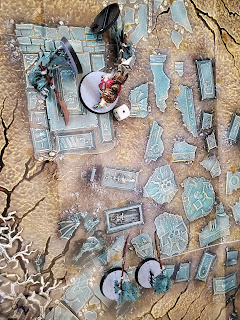 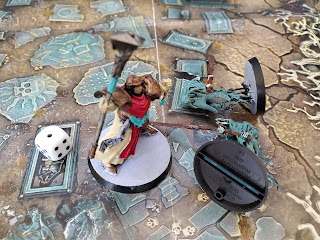 So, that's the first scenario! It's a pretty simple one obviously, meant to teach the basics of combat, but I'm having fun with this project so far, silly as it may be. Next, shooting!


Posted by amazingturtles at 8:56 AM No comments:

A Battle Report of Sorts!

I say a battle report of sorts, because it was a battle against myself, played on a smaller than normal space. But that's how we do things, and it's better to have a bit of fun in these times than to sit around doing nothing at all. I ain't going to be in any tournaments anyhow, quarantine or no.

So, in this epic matchup of me against me, the Nightstalkers fought the Kingdoms of Men! Many mistakes were made by both sides. 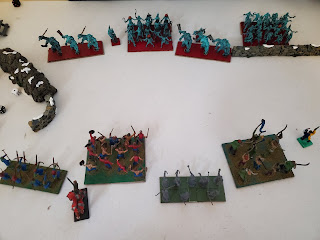 The men had two bold regiments of fanatics bolstered by bowmen and two generals, which at this level may have been a... bad choice. The nightstalkers were led by a horror and fielded butchers, scarecrows, and spectres, all as regiments. 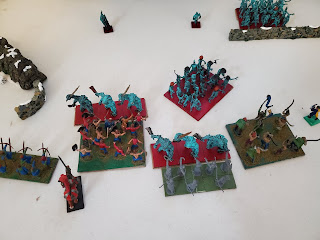 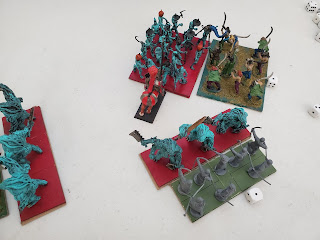 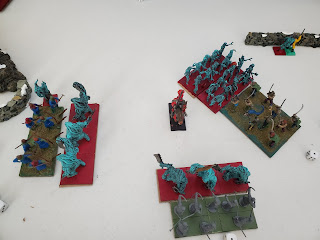 Battle was soon joined, as battles often are. The butchers did their thing with mixed results, and the scarecrows managed only a bit of fighting before being wiped out. But eventually the damage done to the crazed fanatics began to tell, and in one single turn... 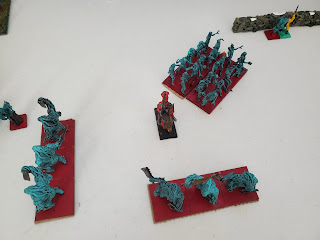 They were all wiped out. Only the generals survived to return home and say "Dang, we really messed that up."

So that was that. Fanatics hit pretty hard as always, but they're fragile too. Probably not the best for fights that drag on too long, but I can see them being more useful if I actually position them right!

Will there be more actual posts soon? Only time will tell.

Posted by amazingturtles at 3:38 PM No comments:

Well now it's been a bit hasn't it? And now here we all are, cooped up and sad and confused. That's where I am at least! I've been busy with so many things, mainly pacing,  dancing around aimlessly, and cooking. But i've had some room for some hobby related stuff to so here it is. I've been working on a force of nightstalkers for kings of war: 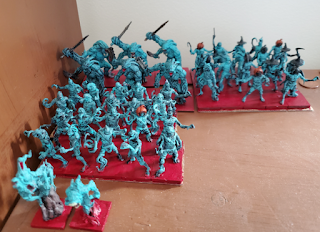 They're still very much a work in progress of course It's never going to be a pretty looking army, but that's not my intention. I want to get them done! And i think with the colors, they'll still look nicely creepy. Hopefully I will actually have more soon!

Posted by amazingturtles at 8:53 AM 2 comments:

Age of Sigmar and Small and Silly Games

I recently has the chance to play an interesting little game with my nephew, and it got me thinking about what I like about games, and what my preferred approach to gaming is.

My nephew is pretty young, and not very interested in rules or competition. He does like story telling, though, and we have a lot of fun when he comes to visit just running around and making up adventures for ourselves. He's also fascinated by the miniatures I own, and we've had a great time just making up little stories around them.

This visit, I decided to try a little something different, something a bit more structured. I let him pick the miniatures and the tell me who they were, while I provided the rules, and interpreted them... loosely. This is what we ended up with:

A group of friendly ogres were wandering around the ruins of an old castle, looking for a good meal, as ogres often do. It seemed for the longest time that there was nothing to be found, only dusty empty barrels and lots of cobwebs, and the ogres were ready to move on. That was when they saw it. A turtle!

Now it is a little known fact that ogres love turtles as friends, and while they were happy, they did not want to eat the turtles, rather they wanted to take them home. But that was when the evil and sinister ghosts of the castle appeared, who wanted to keep the turtles trapped there for all of eternity!

And that it how the game begins. It might not be high art but it was fun to make the story up with him.

The game was simple enough. Each ogre moved seperately, and had to reach a turtle. When they did, you rolled a dice. 2-5 meant a rescued turtle! 1 meant the ogre lost control and tragically devoured the turtle. And a 6 meant the turtle turned out to be a rare Turtle of Power, and both the ogre and the turtle ascended to a higher plane of existence, and were removed from the field.

The ghosts, meanwhile, were trying to steal the turtles away. They could grab a nearby one for free, but it slowed their movement down to 5" instead of 8, giving the ogres a chance to catch up. Combat was done with age of sigmar rules, but could only take place if one of the combatants had a turtle nearby.

It worked pretty well, and the ogres ended up winning, rescuing six turtles, eating two, and one ascending. The ghosts only managed to steal two. Since I was the ghosts and my nephew was the ogres, this was the ideal result.

It was fun, and I think this is the kind of game I like to play the most. The one where it's more about working together to tell a story, than anything else. I leave you with that, and this one picture 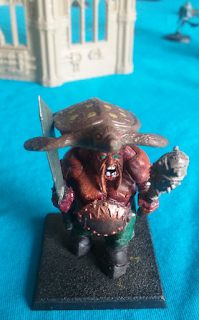 Posted by amazingturtles at 6:25 PM No comments: